our way, or the highway. 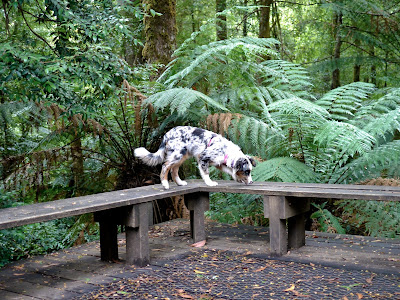 Today, Husband and I took Lumen to the local dog club for the first time. We were intending to sign up because I used to train there with Mallei and they had a good agility program, plus there's a lot to be said for Lumen being able to work with all those other dogs around and under distraction.

We didn't join up today because we don't have our membership cards for Victorian Canine Association so it would have cost us $15 more, and that seems like a waste of money when they're on their way.

On the way out of the building we bumped into a woman with two Aussies who trains at our Tuesday night place, and is one of the instructors at this club. We started chatting, and she told me how their agility training works.

There are different 'modules', essentially, and you have to pass each one to move to the next one, and you need to pass them all to start sequencing, going to the evening class for people competing and so on. Ok, no worries...
I asked her about the contacts module - said I was planning on training running contacts with Lu.
She looked awkward.
Well, she said, in order to pass the module your dog needs to do the whole dog-walk, then touch its nose THREE TIMES to the ground.
Uh...

So I'm familiar with two-on-two-off, and I'd like Lumen to be capable of doing that if I need her to - who knows, could come in handy, however, 3 nose touches? I asked what would happen if I didn't get her to do 3 nose touches, thinking I could cheat by getting a 2o2o just for the assessment, and do running the rest of the time. Apparently, this will not earn a pass.

Look, I know I'm going to be fighting an uphill battle in Australia with running contacts- frankly, nobody does them and everyone's afraid of them, but in this case, even this instructor (and apparently 90%!!! of the other instructors) agreed that 3 nose touches shouldn't be THE ONLY way to pass.

I just find it ridiculous that there should be such a restrictive requirement for this - as a teacher (or in this case, instructor), you're meant to be able to change what you do to suit the needs of your students (and their dogs). If I'm a fairly experienced handler who is going to be getting additional training (though Silvia Trkman's online running contacts course and probably private lessons ... somewhere...) and who trains at home to do a particular method, with my particular dog who, I'm willing to bed, will find much more joy and drive in running than stopping, then they should be able to tailor their program to accomodate that. And if my contacts end up being all messed up, that's my fault, not theirs. Trainers shouldn't ever assume that their way is the best (and only) way to train, and I think for most things (handling, weaves, whatever) they don't... so why are we all experts in contacts??
Posted by Em, Lumen, Mallei at 5:23 PM

Em, Lumen, Mallei
This blog is about our journey- from 8 week old pup, to agility star, school dog, and trickster. Training thoughts, tips and ideas along the way, photography and general musings on owning a silly and serious paradoxical Aussie Shepherd.

what's it all about?