running with wolves... or in this case, dogs. 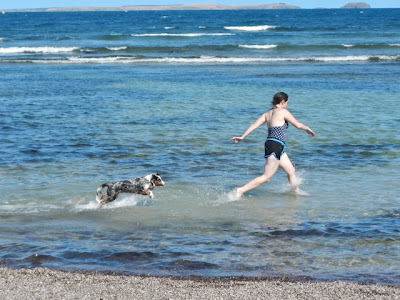 On Sunday, Husband and I took Lumen to the beach. The beach is a good hours' drive from here but we've found a great off-leash dog one with high cliffs and lots of room to run, swim and play. The water gets a little deep too quickly for Lu who is swimming in a couple of bounds, but not deep enough for us to swim.

While we were there, I'd been romping around with her, as I do. I like to run, especially on the beach where we can charge into the water together, or kick up spray in the shallow bits. Some young women had seen us running, and asked in despair how to get their dog to run with them. Their dog was a young male border-collie, very interested in the ball they had, but completely disinterested in them. High herding instinct, it would circle them like mad... One of the women took off at a run, border flanked her, circled, and demanded the ball be thrown. To me, there didn't seem to be any connection between them and that dog- at least not at that time. The question struck me by surprise. I'd been running with Lu since I got her. I don't mean going for jogs, I mean quick sprints up and down the backyard, which eventually lead into sprints at the park. Didn't everybody run with the dog??

I like to run particularly with agility in mind- I throw in front crosses, get her to stay on the side my hand is out on, circle, rear-cross if she gets far enough ahead. I think that the majority of the 'stuff' you do in agility isn't contacts, or weaves, or even jumps, it's all that running inbetween. It's your dog, chasing you, being chased by you, turning and changing direction, and responding to certain cues.

The aim of those early games was to teach being on one side. For Lumen, chasing is one of the best games. As a puppy, she'd get so caught up in trying to catch me and bite my ankles that a tough little growl would come out of her. Then she'd pull my pant-legs. Yeah, training her out of that was great fun. But because the game itself was so rewarding, the way for me to teach her to stay on the correct side, was to stop running if she made her own decision to cut behind me. Game over. Try again!
Sometimes, I'll run with her and have her target to a toy in my hand. This helped her learn that the side with the arm out is the fun side. Now I just have to remember that she's not experienced like Mallei and still needs that cue- he would just run along beside and take tunnels and jumps as I told him to.
We also did a lot of nose to hand targeting when she was young, which comes in handy for about a hundred other things, but you can work it into your running by moving the target (your hand) once the dog is confident in targeting it while stationary in any position. Then you can move your hand and they should follow it to hit it with their nose- just make sure they can!!

Interestingly, I hadn't realised until I got Husband to film us running at the beach, that she's a sneaky little herding dog. Because she's not currently driving forward to the next jump or obstacle, and I can't possibly run as fast as her, she's looking up at me and coming around in front- meaning I either throw in a circle (she gets what she wants - herding dog!), stop (again, herding dog!), or trample her (not great either). So obviously we still have work to do.

There's even more benefits to running with your dogs than just all this though...
For one, I was puffed by the end- running in sand is hard!
Second, apart from a quick glance at the golden retriever running towards us, Lu is focused on me- despite all the other dogs and people around, smelly things in the sand, Nic somewhere else (filming), I am the centre of the game. This is invaluable for agility, where other dogs will be running in nearby rings, or playing tug, and I need her focus to be on me and where we're going.
Third, in the video you can see I throw the rope/ball forward- this is helping teach her a 'go on!' or 'go!' cue, very useful for home straights in agility, as well as diverting focus from you, to ahead (which in turn leads to obstacle drive and focus).

Do you run with your dog?? And if not, why not? It's one of the easiest ways to get some foundation skills in your agility dog, and all you need is a toy and your runners (or sneakers).

Em, Lumen, Mallei
This blog is about our journey- from 8 week old pup, to agility star, school dog, and trickster. Training thoughts, tips and ideas along the way, photography and general musings on owning a silly and serious paradoxical Aussie Shepherd.

what's it all about?